The public is becoming more and more aware of the shill media, as in media outlets that push a product or political stance, usually for financial gain. However one dirty tactic which seems grossly under reported is the fake 'little guy' outlets.

So the fake 'little guy' scam is when a huge company sets up or buys a small independent looking operation. These are fronted by people supposed to reflect the audience and form a very pally pally relationship with their viewers. Their intent is anything but friendly and is rather in fact a form of grooming.

It bothers me that they would pretend to be something they are not, it's the tactic or a manipulator and abuser.

One such media outlet that I feel is very manipulative is Inside Gaming, a tiny kooky band of misfits who are, omg, so #relatable and impoverished. They are of course owned and operated by WarnerMedia (list of what they own https://archive.is/Bb7L3) who's profits are in the billions ( $31.27 billion according to this source https://archive.is/sGApM). 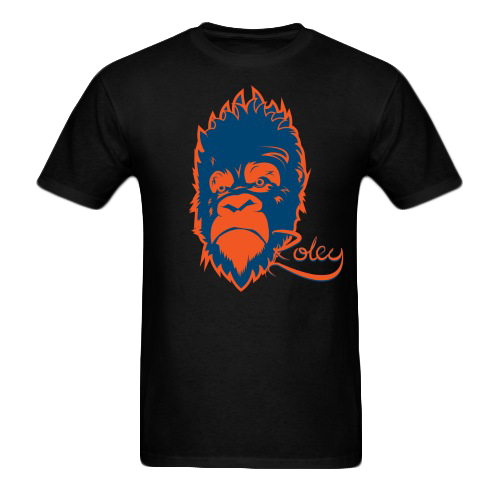 So "Notch Removed from Minecraft" was the title of the video in question from Inside Gaming, I clicked wondering what that could mean, after all the guy sold the intellectual property to Microsoft ages ago. Well no sooner had the video started playing that I recognised one of the hipsters from "Funhaus" (part of the co-opt network) and I instantly knew this would be some far-left soy infused hit piece.

And oh fuck did they deliver by raking through his past and then go on to basically call him crazy (see video below but remember to take precautions before you view).
They mislead their audience by insinuating Notch was a greedy capitalist, who was kicking at the poor peasants (soy boy literally emulates kicking, so the children really understand his point). They did this by calculating the $300,000 (about £230,000 in real money) they were offered as a bonus, against the $2.5 billion (about £1.9 billion) sale which they have at 0.012% - as an inferred share of that sale.

$300,000 is a lot of money and let's not forget these were employees not business owners. They weren't getting a share of the sale because they weren't entitled to one, they were getting a fucking huge bonus and by Microsoft, not Notch- they even flashed the information on the screen for the children to see, knowing they wouldn't check it.

Here's the heading they displayed from the article (below). 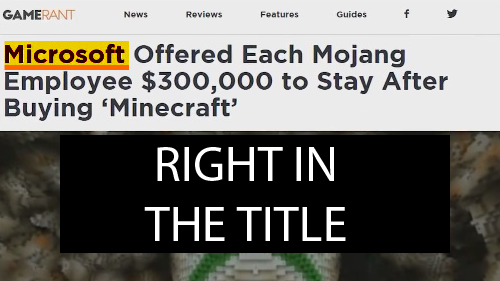 Despite it being right in the title the $300,000 was inferred to be from Notch.
Unlike the hipsters, let's actually pull some of the information shared (article found here https://archive.is/1K3jI). It states the employees were offered $300,000 on top of being guaranteed two years worth of their monthly salary, following the closure of the sale - not a tiny amount of cash in anyone but a Communist's tiny mind.

They doubled down with the abuse of facts by showing Notch's own Tweets and then zooming over the word "cheap", right before soy boy does his kicking the peasants bit. I didn't see his kicking gesture, just his expression on his toad like face, but I imagine it was like watching a woman kick a football.

In their character assassination attempt, they both figuratively and literally looked passed the fact Notch states in is Tweet that he offered them 2 million Kronor (about £230,000 and no I don't know the context of "after tax") from his own private money. 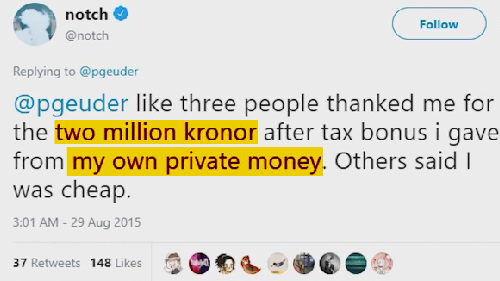 They ignored the facts and focused on the word cheap to set up there next character assassination scene.
So that's over £500,000 (don't know what their 2 years worth of salary was worth) on the table, just to carry on turning up to work - only a twisted mind would think that was bad or someone trying to spin the truth.

The wobbly haired soy boy did a throw away line "yeah, have your security guards beat up another Microsoft employee", but for the fuck of me I can't figure what he was referring to. Their was no mention of Notch's security being convicted or even accused of such a crime, but with internet censorship rampant you couldn't say if Google has disappeared something. Would have been real helpful if the boy would have said what he meant like a man.
As for the "female" who has the perpetual victim look about her, she too had a throw away line to add (look at the picture below which one of the androgynous lefties has the bigger tits?) . About how she went to one of Notch's parties once and it was "very intimidating".

Your first thought might be to laugh this off, as she looks like one of those who has all sorts of self diagnosed 'mental health problems'. But in the wake of the far-left weaponising victim hood and making fake rape accusations, you can take it that the scene could be implying sinister events, especially as the scene zooms to her alone and cuts the existing sounds to add an air of weirdness. 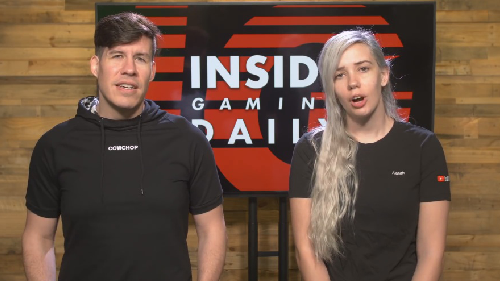 Starting to asexualise presenters. Tiny tits on the "guy" and tiny tits on the "girl".
The whole video tries it's best to tar Notch with the "conspiracist" brush, all with complimentary association of Alex "totally-not-a-misinformation-agent" Jones and Michael "I-just-wanted-to-see-if-it-fit" Jackson of course. But what of his opinions are they trying to discredit you wonder? Well there is a mention of pizza gate, so someone looking out to protect the reputation Hilary Clinton and/or the democrats maybe got their knickers in in a twist. Or it could be the white male billionaire using his platform to highlight the agenda against white men.

Either way the "female" hipster thoroughly debunked these non-sense claims by stating "we're not going to debate the merit these claims - because there aren't any".  Well tickle my arse with a feather if that isn't some top tier journalism (and the channel does tout that this female NPC was hired because she is a "journalist") - nothing to see here folks, move along. Just avoid the mountain of evidence and don't you dare think for yourself. 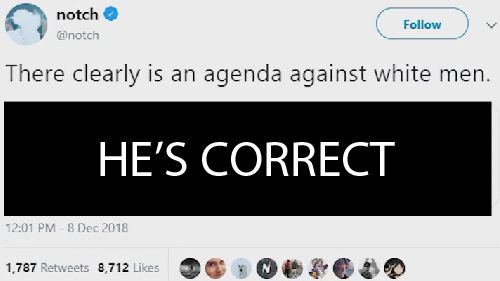 Weirdly enough one of the most sickening things about the video was how the far-left try to emulate normal people and come up with alternative sayings to pass themselves of as normal. "Get woke, go broke" is a phrase used to describe the action of a loonie company courting loonie left-wing activists and then the inevitable crash and burn of that company as it loses it's customers for a crowd that doesn't believe in capitalism - weird that.

Well toad faced soy boy had his own at the top of the video "get based, get erased" - which no gimp other than toady has ever said. But to put it in context the phrase would be celebrating the fact that whistle blowers would get de-platformed.

It's time to identify the sources of the problems the West faces. To start, those who are drawn to the far-left tend to be those that choose to be weak, whether physically or mentally. This can be down to lack of a broad education, which leads to indoctrination, whatever side of the political spectrum you attach your snowflake to. This stands to reason, as you can only form facts on the information you've been presented with. If you don't have the desire or inclination, to do any additional research off your own back and you are only hearing one side, how could you possibly do otherwise? This isn't just for the individual, but also for the group which the individual associates with, as peer pressure can be a huge tool for conforming to bad ideas.

However these are just the people who are used as scapegoats to "protect" with draconian laws, that any rational free individual would see are only meant to erode those natural freedoms.

No, while they are useful for people to push and pull public opinion and we really do need stop the systems that create them, they are far from the source of the problem.

The problem lies with consolidation - too much power sitting in the hands of too few.

While we could go on and on into those who sit in the driving seat, then start to profile them and their characteristics, it would be more useful for us to build up a profile on organisations and businesses who are at the head of this attack on the West. Also the individuals who are in those key roles of abuse.

And this is your homework for today, go find the network of those looking to subvert the West. Look at those who pulled advertising money from Youtube when the non-troversy broke, look at those who report negatively on whites and Western culture constantly. Look at the leaders in implementing subversion in politics, business and media.

Only when we build a complete picture of these criminals and their modus operandi (method of operating) can we bring them to justice.