​In this Prey story recap we cover the secret lore of the original Prey 2006 game, published by 2k Games. This way you can compare how the new Prey 2017 story, by Bethesda, holds up on PC when it‘s released on Steam.

Who knows, I might even make some Prey movies using Prey console commands and Prey mods in the future, if the game supports it. Unfortunately the original Prey game is not available on PC at the moment, so I can’t use game footage to make a Prey story recap. 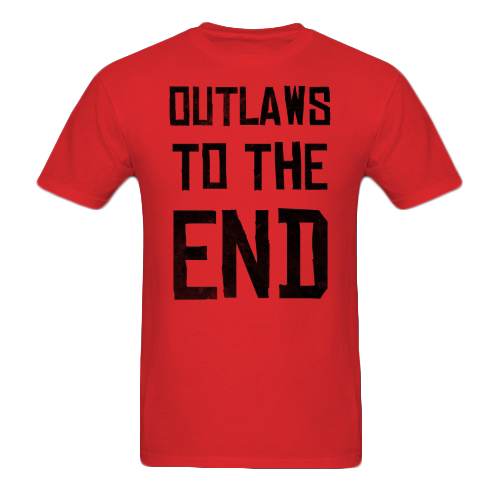 Outlaw Until The End Shirt

Get Anally Probed To Death

After unsuccessfully trying to convince his Pocahontas girlfriend to leave the tiny piece of dead earth reserved for them by the pale faces - you get into a bar brawl.

Which gets spiced up by the fact the whole bar your in gets picked up and taken to a giant spherical alien spaceship.

You, your Granddad and old Pocahontas, are amongst a whole bunch of other people who’ve been stolen because the aliens plan on eating you all and using you for their evil ways. So I suppose you’re an Indian take away.

Anyway, you get freed by one of the ships cybernetic denizens, who wants to help stop this evil sphere. You see old Granddaddy get anally probed to death. Which turns out to be another stroke of luck because after a near death experience, he gives you super native Indian powers - after you see his spirit in the native Indian version of never never land.

Charged with the duty of saving the Earth from becoming a fast food restaurant, by his ancestors, he ignores their advice because he’s thinking with his peace pipe, so goes chasing after his girlfriend instead.

Along the way he learns these aliens seed different planets with life, only to come back in the future and consume all it’s contents. Unfortunately he has to kill his girlfriend, who has been changed into a beast by this foreign invader.

With the aid of his super Indian powers and a small enclave of human’s, with cybernetic enhanced abilities, living on the ship, you come to face the person in charge - going by the name mother.

You remember playing countless rounds of the Binding of Isaac, so you know you must kill mother. After defeating her though, she tells you that you now must control the ship, to save everyone on board and teleports you to the control room, where you’re overwhelmed with power.

Old Granddaddies' spirit pops by to point out it’s a trap, so you dutifully fly the whole thing into the Sun.

In the spirit world you are reunited with your Granddad and girlfriend to say a heartfelt goodbye.

You get beamed back to Earth, where you meet the blue tooth enhanced humans from the ship, who escaped before you flew it into the Sun, murdering everything on board. They say you’re a great guy and open up a portal, so you can meet a bunch of other secret people who think your great too.

As you walk through the portal the words “Prey will continue …“ pops up and 11 years later you make a quick recap video about the story and continue to wait for ​Prey 2 - bye!

​Hopefully Prey 2017 will be a great game, even though they are not visiting the original Prey storyline it looks like another awesome game by Bethesda. It could even possibly spawn the fabled Prey 2 that’s so long overdue - even if it will be a completely different video game.