A lesson that's took many years in the making to learn, but I now realise - is that I need to focus. You could easily put it down to an age thing, you know becoming more reflective of your life and whatnot. But I like to think it's because I'm growing.

Now this all coincides with a video I watched, from one of the indie developers at gaming studio Butterscotch Shenanigan's. It's titled "The Last Game I Make Before I Die", it details Samuel Coster's personal troubles and how he pushed himself on (I'll let the man tell you in his own words, he really gave a fantastic inspirational speech - see the video).

But the take away from it (at least for me) is that you really should focus on the things that matter to you, because you don't know when your last day is. Now this resonated with me because of things I've been going through in my personal life. Not that you should need a sign to take action - but this really is a sign to take action.
I want to quickly touch on health and particular, men's health.

It's something we don't take serious enough, particularly when we're young and we should. Things like depression and anxiety aren't supposed to be experienced by 'men'. Let me tell you now that's horseshit! Men do get depressed and suffer from anxiety, which make it all the more dangerous, as they often don't get help straight away because it's not perceived as 'macho'. Let me tell you what is manly, going to the doctors and taking care of business, no matter how trivial it may seem.

Like I said, I don't want to linger on this too much, but here is an interesting article written by the NHS "Anxiety and depression linked to increased cancer death risk".
The reason I mention this is you would think that creative industry jobs are safe, especially when compared to something like construction - but they're not. And I've worked in both, so I should know.

In overly simplified terms it's easy to come off the tracks, which has a knock-on affect. But rather than dwell on how you got there I want to cover the solution - focus! (See how it's all tied together? Not bad seeing as I'm half awake and eating cereal as I write this hey?).

To help you understand what I'm talking about, here is a little diagram I made from the video with Sam. 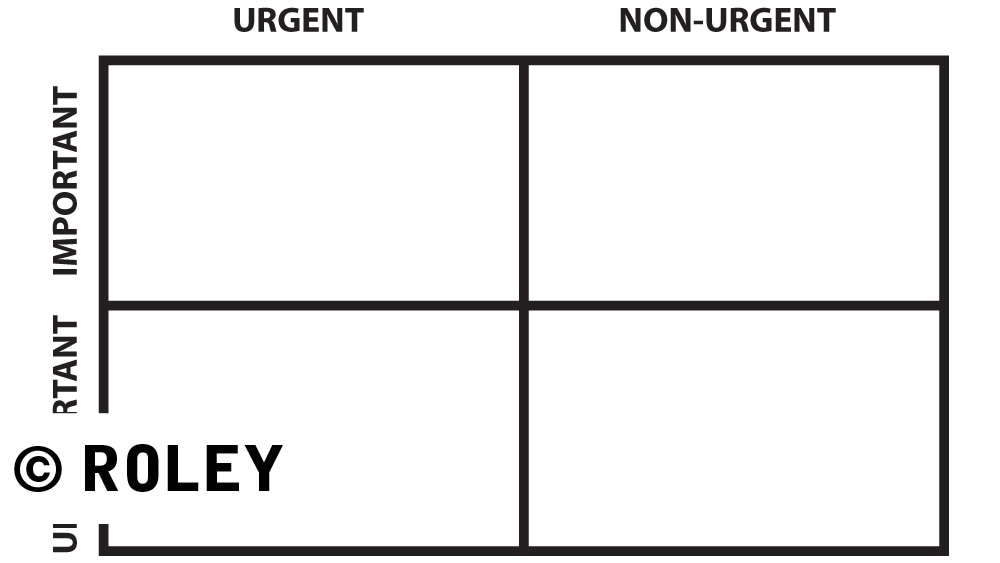 Game Development
Now it's got just 4 sections - unimportant, important, non-urgent and urgent.  You can place all your life's activities, hopes and dreams into this 4 section box. I encourage you to do so, write them in and see where you priorities are and where they should be instead.

I, like Sam, found that things that were important to me, found themselves relegated to the dangerous 'important but non-urgent' zone. It's been a long time coming, like I've said, but I'm re-ordering what's worth my time.

As I've decided I only want to do the things that matter to me I've cut YouTube, it's just toxic and worse than that - it's useless. I will occasionally use it to drum up a tiny bit of traffic, but outside of that my time is best spent elsewhere (which turns out to be here, you lucky son of a gun).

​Oh I recently did a Prey Story Recap video, it was a bit tongue in cheek humour but a lot of fun. I didn't animate anything as the window to get a bit of traffic from it is very short. But I did draw every single scene myself and made the music in the background. Hopefully it can make enough cash directing people to the shirts that I can get a copy of Prey 2017 myself.
Since the last little chat we had I developed and released, a small space shooter game called Kalzor: 2000, it's available now using the Humble widget. It's a weirdly addictive game that you sink five or ten minutes in here and there, but adds up to a ton of gameplay time and most importantly it's fun. I developed it because I knew it would be quicker to produce than the current game I'm developing and it taught me a thing or two, which was cool because I always like learning new stuff.

As for my current game (the one I referred to in the last chat we had) I was putting together some art for it, and oh my god does it just seem right. I honestly want to show it to everyone so bad right now, but I'd be shooting myself in the foot revealing anything this early. Needless to say, when I can show it you I will.
The tricky thing I face in going independent is that 'independent' part. I have to weigh off bringing traffic in, and keeping quality up. But as long as I focus on doing what I want to do, everything else should fall into place. Hopefully the people who stumble upon me will see the effort that's gone into everything I do and fall in love with all the work.

As far as site traffic goes it's all good so far. The site is getting indexed and starting to be searched for, also bringing in search term results traffic too. As content grows I may need to do some outreach, but I hope word of mouth will save me the effort (I guy can dream).

I've picked some franchises I've always wanted to cover, so I'd thought I'd share some of their names this way you know what to expect. Deep breath: Fallout (1,2,3 and New Vegas), Bioshock (1 and 2) retro games (not naming them, until later), Skyrim (maybe earlier Elder Scrolls if there are any takers), GTA (from 3 to present), Red Dead Redemption (1 and 2). There will be more that I don't want to list at the moment, but you can already see there are a lot of things to be working on and hopefully you recognise somethings you like. So keep checking back in.