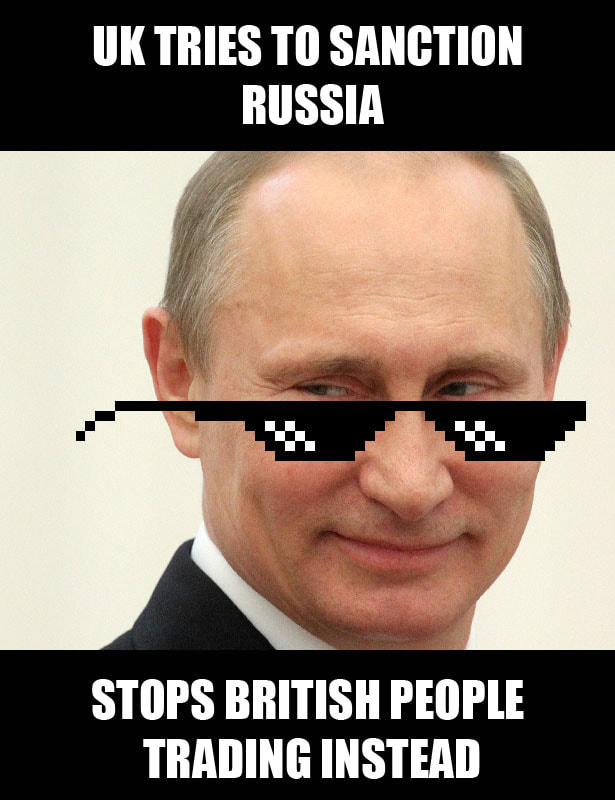 Evraz shares were forcibly halted from trading by the overreaching UK regime by their proxy “private company” the London Stock Exchange.

The flimsy reason they gave for this further attack on the UK economy and by extension attack on the average UK tax payer, was “protection“.

The UK regime are trying to convince the gullible that the panic in the market, that their controlled media is creating, can only be tempered by regimes directly controlling if individuals can earn money to feed their families or not.

As the UK regime is divorced from checks and balances, no one knows if the Evraz trading suspension will last a day or forever.

I mean exactly when will Evraz shares be traded again?

UK Government's attack on it's own economy

​What this forced paused in Evraz trading by the UK regime means is that UK traders face an unprecedented threat to their public self sovereignty, not seen since the medieval ages.

A time when only those with special permission from those forcibly in charge, could have any kind of an existence, while the masses where little more than slaves.

Without giving a time frame when or indeed if the Evraz shares will be allowed to be traded again, UK investors face not only losing access to the money they invested. But also the lost opportunity trading Evraz shares or others, with any gains they stood to make.

The move has shattered the lie the west tells the people forced under it’s serpent like control, that we live by the rule of law. The law that has so many checks and balances, so as to protect the people under it.

Anybody with even a basic grasp of what is right and what is wrong, knows that Russians shouldn’t have their assets frozen without evidence of wrong doing.

Even if you take in the possibility the UK spy agency may have secret squirrel information it wants to hold to it’s chest. You have to be aware that same regime controls the banks and any proceeds could be held or seized, that would be channelled to those individuals.

They don’t have to punish UK tax payers. You should be able to buy and sell Evraz shares as you please, after all you have done nothing wrong.

Imagine if the next time the US invades another country the UK regime seizes the assets of any American businessman - for example Bill Gates.

Then you have to consider how this move destroys the argument we have any right wing political parties in the UK. The move happened under a so called conservative government.

​Despite any regimes best efforts to stifle any conversation about self sovereignty, you can take comfort in the fact you are not alone the opinions you have, they are shared by the silent majority.

As for direct action you can take, well that’s simple - you have to TAKE more control over your own finances.

Create and store wealth outside of the regimes grubby paws. Take full advantage of emerging markets and investments.

If the UK regime pausing trading for UK share holders, while offering no evidence that the company has done anything wrong doesn’t scare you - then you are a lost cause.
This is all NOT expert advice (otherwise I would have charged you) this is just simple information and I’m sharing my opinion.
By Roley
​11/03/2022