Creator Pass
Support content like 'Easy Fish Bottle Trap' by purchasing a creator pass.
Now kids these days spend most of their time playing video games, taking crack and jerking off, then posting it all over social media - all the while pulling a stupid face. So the simplicity of this easy fish bottle trap will most likely shock the hard of thinking. When I was a kid it was different, a more innocent time if you will. We didn't have many video games and social media didn't exist, so you had to go outside to try and entertain yourself, as there was only so much jerking off and crack you could do in a day.

He first came up with the design many hundreds of years ago in somewhat of a different fashion. You see he lived in a time where plastic didn't exist and witch craft was all the rage. What he did was come up with a crude version of this fish trap, but instead of recycling plastic bottles, he would use the wombs of prostitutes - claiming the allure of their nether region was the world's best lure - sent from the nether region.

Yeah sure he was burnt at the stake for being a witch, but luckily his work passed on to his son. Not the murdering of prostitutes and using their wombs as a fish trap part. Although his 22 other brothers did follow their father down that same path and they all met the same fate at the hands of the villagers. No, the only surviving heir to the fish bottle trap throne chose to try improve the design and test different materials.

The result of this evolution of a DIY fish bottle trap is a design so perfect, that it may very well turn into a being of light and ascend into heaven when you've made it. That is of course, if heaven wasn't a crock of shit story told to keep the idiots inline - but it is a fucking good fish trap.

This is a nice cheap project that anyone can do, as the main things you need are a 2 litre drinks bottle and some string. If you wanted to really test your survival skills, you could search for this stuff just lying around.

What you will need for the fish bottle trap: 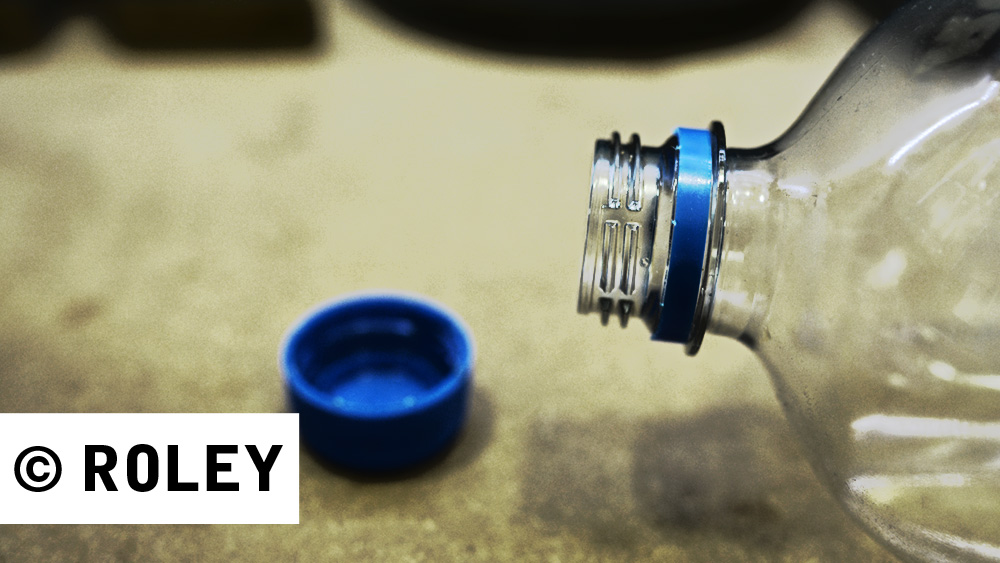 To start making this easy fish trap I had to drink the contents of the plastic bottle, which wasn't easy I can tell you, as I only drink Pepsi with Jack Daniels. One hangover and a night of cheesy eighties music later and I had the basis for a fish bottle trap (I tell you the things I go through for you people). Of course we don't need the lid so we can wiz that off (you might be able to use that for something else, so put it in a draw with the rest of your dreams sweet pea) and then remove the labels and give her a swill inside with water. (Also remove the plastic collar on the mouth of the bottle, I just left this on to make things easier to see in the video and pictures.) 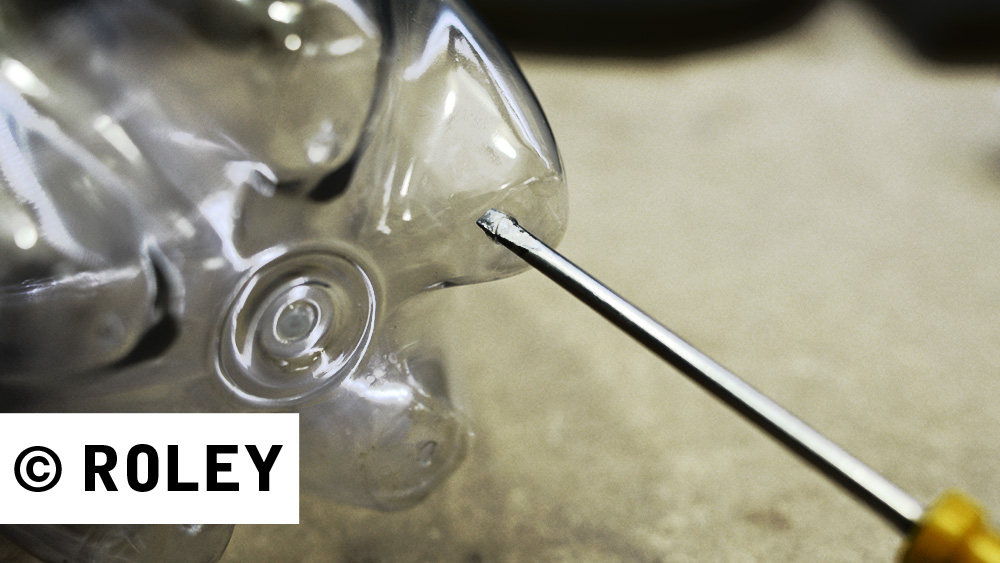 Carefully make holes using your screwdriver in the dimples of the plastic bottle. These holes allow the fish bottle trap to sink and water to flow right through it. However any holes you put in your hands or face serve no purpose other than to let all the trapped blood out of your skin. ​

Quick Tip For A Straighter Edge 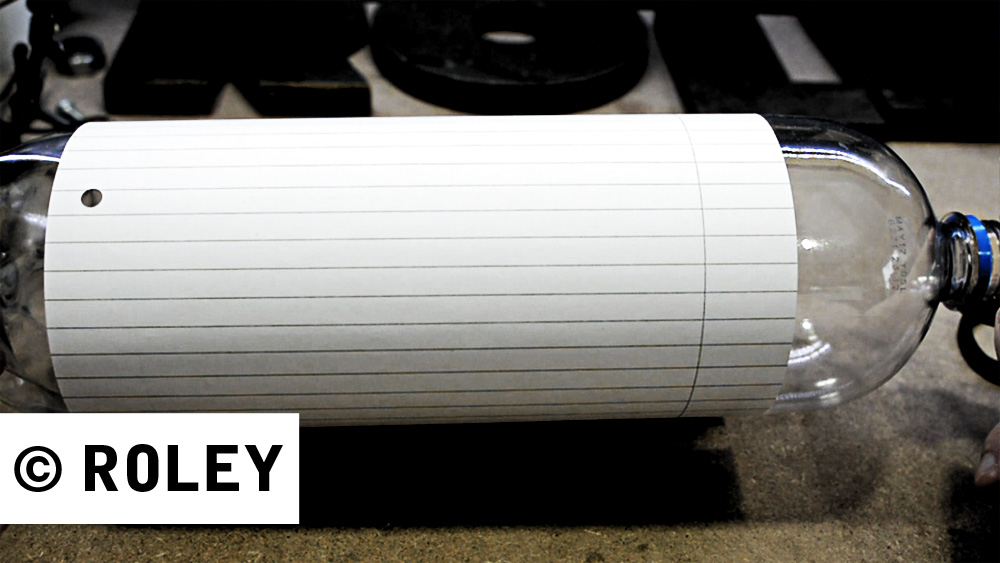 Now this part is optional, but it will help you cut a straight line, especially useful if you skimmed off the bottle and hit a nerve when making the holes or if you're trying to make this plastic fish bottle trap with Jack Daniels and Pepsi running through your veins.

​Take your A4 piece of paper and wrap it around your bottle leaving about an inch of flat side exposed. By this I mean where the plastic bottle wall starts to straighten out after the round part of the top. When your happy the paper looks straight then stick it down with a bit of tape - you now have a line to follow when cutting.  ​

Then take your knife or scissors and using the papers edge as a guide, cut around the line. You will now have two pieces. The small part is this cheap fish trap's lid and entrance, while the bigger section is this plastic bottle fish trap's body, where the fish will collect.

You now need to make holes into the wall of the bottle through both pieces. This will allow you to secure the entrance in place and stop the fish escaping before you're ready to retrieve them.

Start by pushing the entrance of your fish trap into the body of the fish trap, until the edges are roughly level or there about. Again an optional tip to help you out is to put tiny black dots inside and out off the bottle to help line things up when you make the holes. Now take your screwdriver and pierce through the walls on both sides.

Put your string through the holes and tie it off on both sides, a simple knot is all that is needed as otherwise you will have to replace the string every time. The string acts as a way to close the lid of this easy fish bottle trap, a handle to carry it and a means of securing this diy fish trap (with the help of a stick) and stop it being swept away in the water. 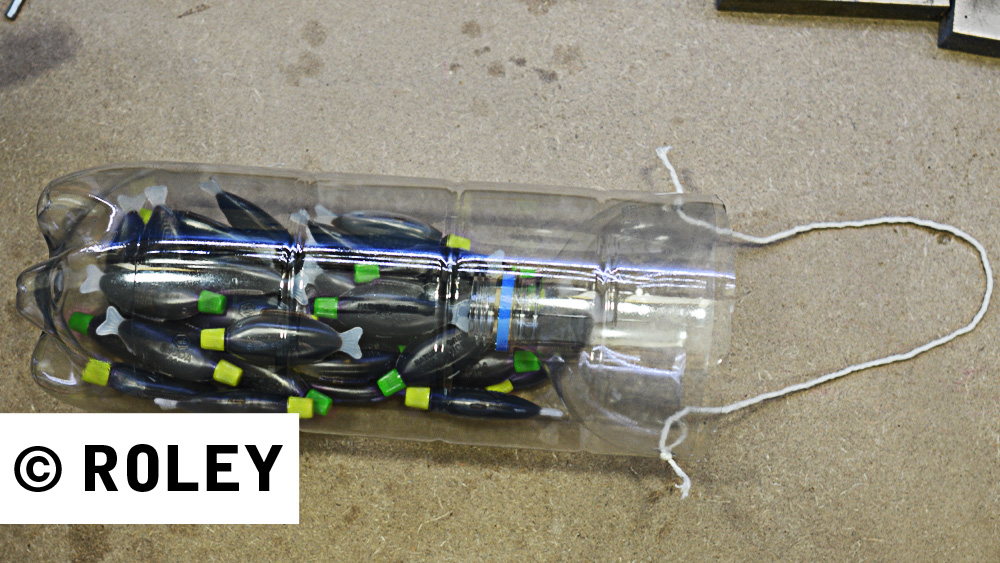 Your quick fish bottle trap is done, so what you waiting for? Stop jerking off or at least cut down a bit,  go out and catch something other than an STD.

Always remember what Roley says kiddies - "Give a man a fish and he'll eat for a day. But give that man a fishing rod.... and he'll chop it up for firewood or swap it for a fish." Kisses!
People who watched this went on to watch:

Get the t-shirt featured in this episode.