Everything you need to know about Days Gone

Days Gone looks fucking awesome and I'm not talking about the graphics. The chance that the zombie line of games can get more titles made with them as the theme like Days Gone, whether central or as a back drop, is exciting - as zombie survival games have so much untapped potential. Which isn't really surprising, as zombie survival games really haven't been around that long. 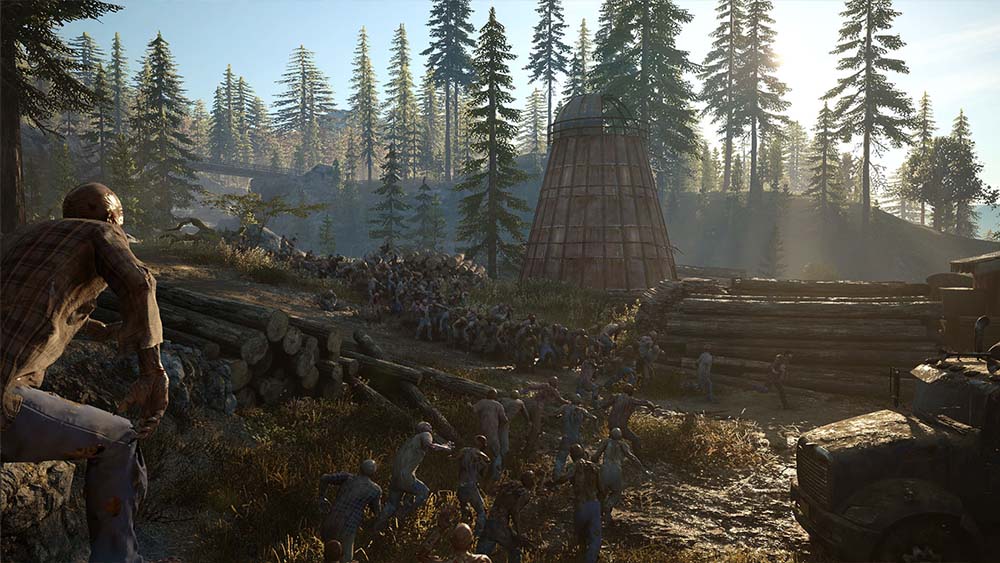 Deacon has a different opinion from the crowd and now they're after him
Days Gone itself however looks like it draws inspiration from several top titles, like Sons of Anarchy, I am Legend, The Walking Dead and of course The Last of Us. If the mention of them titles doesn't make you thrown on a lumberjack shirt and splash Jack Daniels all around your face in anticipation, then you're probably not going to be into it as much as me. 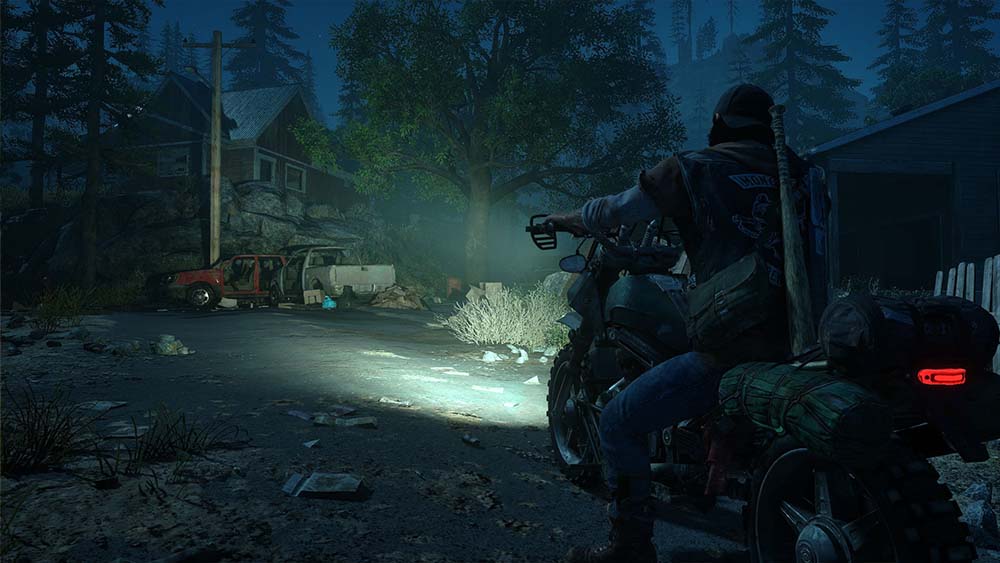 It seems Deacon's pizza delivery service is no longer required 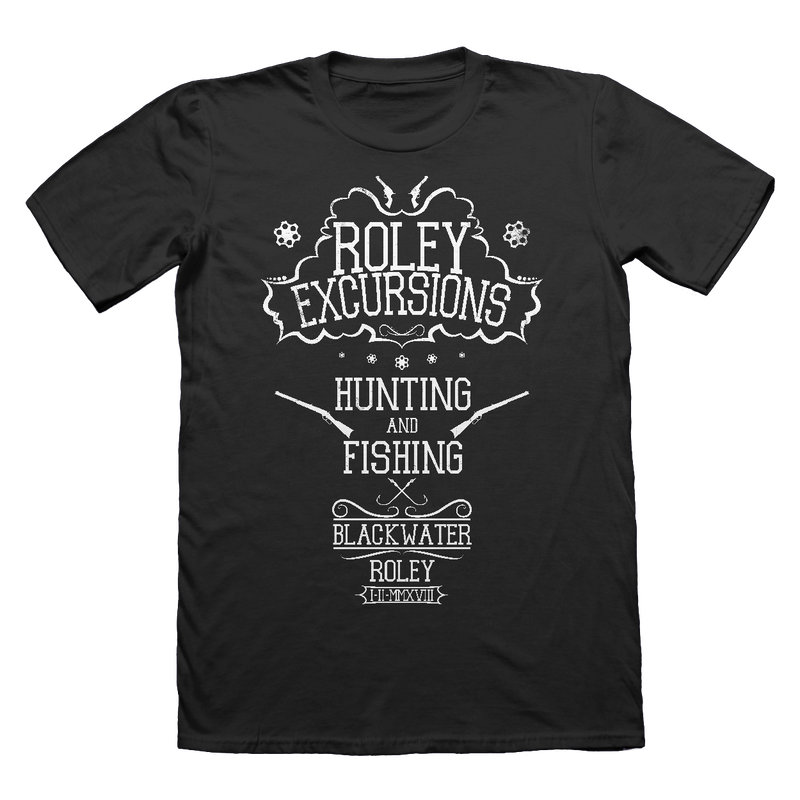 Roley Excursions
If Days Gone does manage to walk the narrative path that The Last of Us set for modern survival games, without falling into the trap The Last of Us fell into with it's crowbarred political horse shit, it could easily snatch a high rank when it comes to 'games wot iz made reel gud n that'. 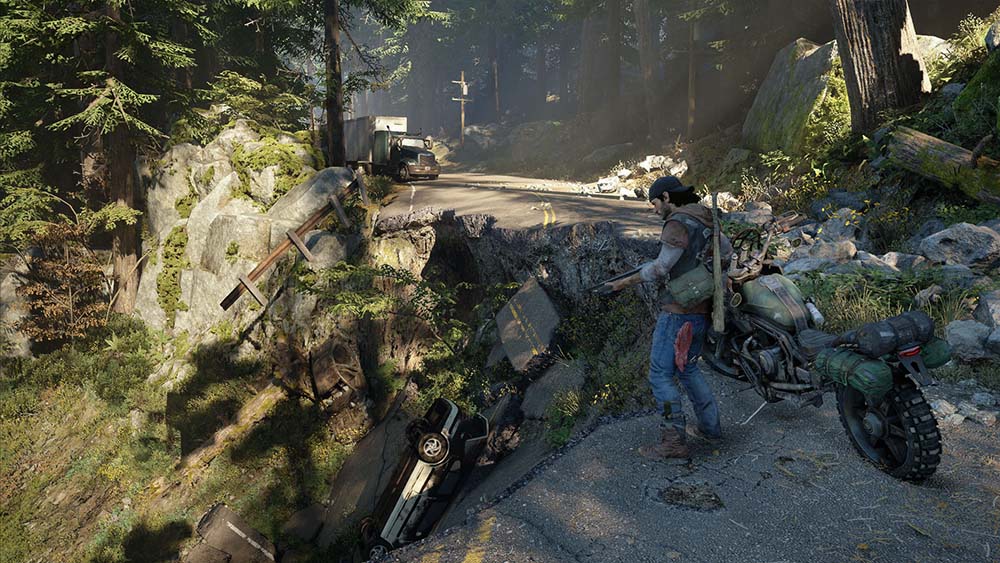 Deacon found a mysterious hole - he's still looking into it
Unfortunately not a lot is known about the game and not a great deal has been seen, which can make gamers suspicious. Considering withholding information has been used by AAA developers/publishers in the past to 'trap' customers. But with consoles having to put so much behind their exclusive titles, I would walk on the side of they won't want to fuck it up. 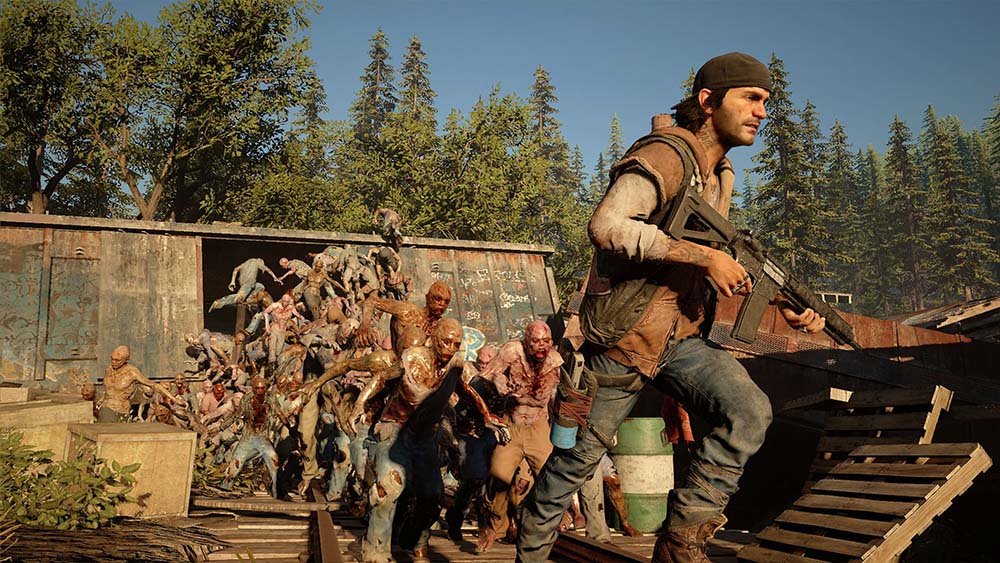 Yeah sure the trains are overcrowded, but how would nationalisation help?

What Is Days Gone About?

The outline of Days Gone story is that you play a guy called Deacon St. John , a lonely loner type of drifter, who is a bad ass outlaw biker. One tiny, but important flaw in this guys character I have seen so far, is he loves to wear his cap backwards - maybe that's why he's on his own, so nobody judges him.

The location in which Days Gone is set is a post-apocalyptic North West of America, with the apocalypse coming in the form of some type of disease. This disease America is experiencing has turned humans into zombie-like freaks called...well, Freakers.

These zombie Freakers seem insatiable in their quest to snack on old Deacon Saint John, as they move in a fluid stream straight towards biting his face off like a deranged chimpanzee. 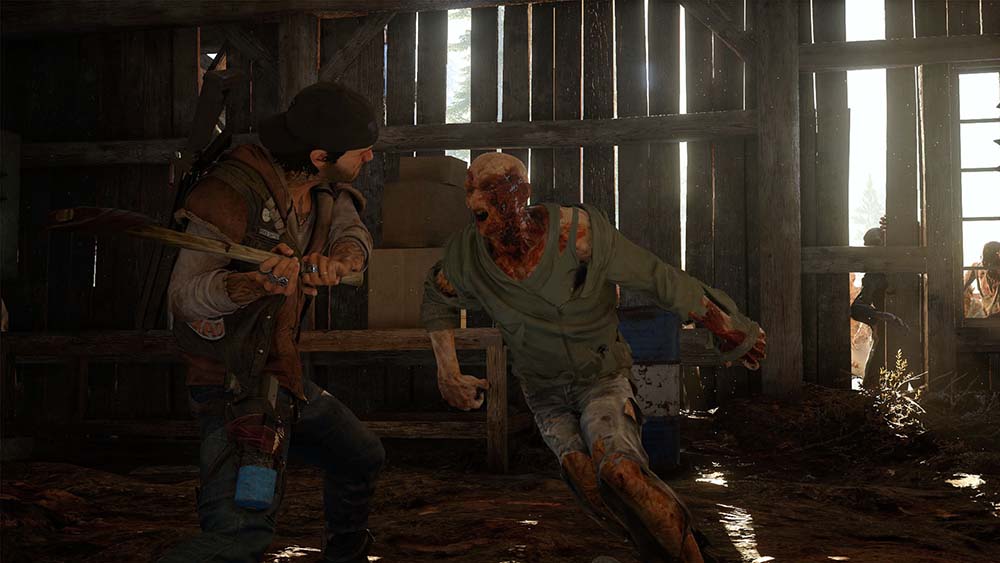 Enraged he has rubbed pizza all over his own face, this former employee must now face the chop

Days Gone is an open world action survival 3rd person perspective type of game, so I would expect similar things to what you've seen in other games. Some sort of crafting mechanic for gear and weapons, you'll also have to scavenge for supplies - probably.

From footage already released we can see there is open weapon play, stealth kills and executions, as well as environmental interactions like traps.

​You can safely bet as a freelancer sort, you will be able to pick up missions as you travel between survivor settlements. Settlements that you won't join - you big lonely loner. 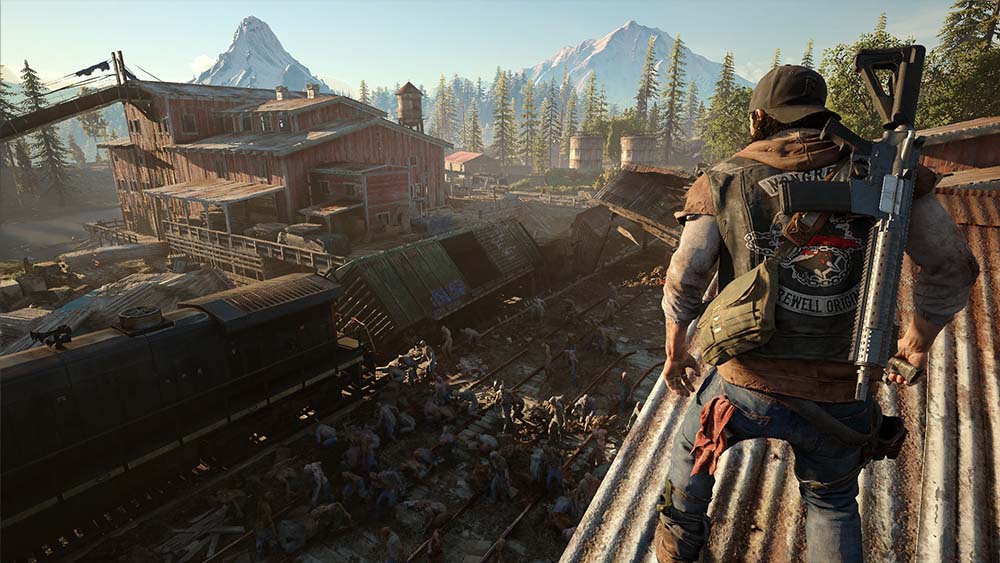 In scenes reminiscent of his visit to Primark, Deacon gets a flashback - why did he get those socks?

Days Gone is set to release early  2018 at the moment, but I'll  let you know if anything else changes. 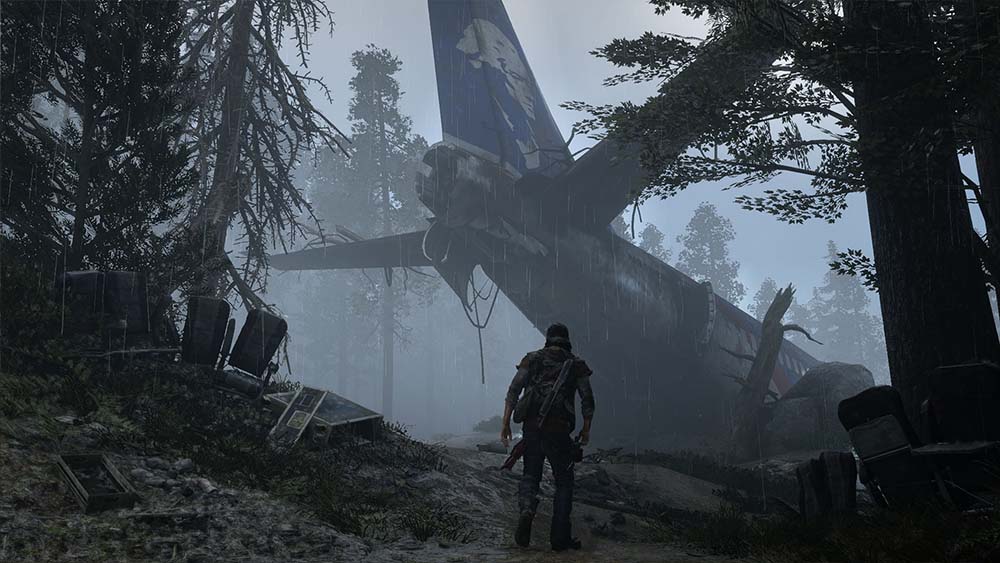 Deacon wants to start his own airline, but it will never take off.

Is Days Gone Coming To The PC?

Days Gone will come out on the PS4 exclusively, which isn't that surprising as it's being developed by SIE Bend Studio  -who are owned by Sony.

I can totally understand this staying as a Sony exclusive, as the industry needs consoles to stick around and from a large developers point of view, the PC platform isn't that appealing. 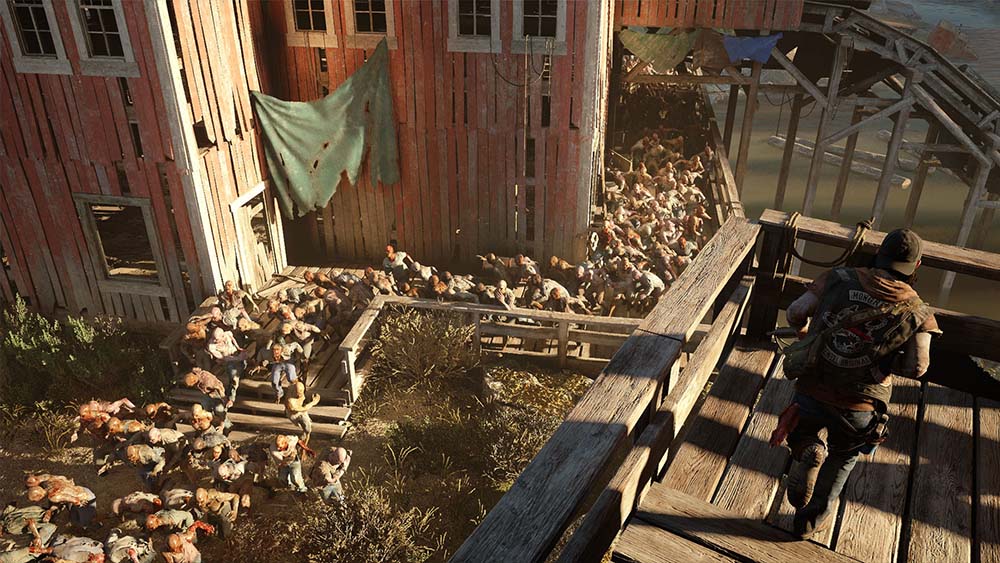 Deacon looks on smugly as he did his Christmas shopping online.
Yeah sure there are the whiny bitches who cry at the moon "Oh no not another zombie game!". But fuck those guys, they're pathetic. It would be like going up to a fruit and veg stall and complaining that they only sell fruit and veg, then going on how this generation of apples aren't very "innovative". The very people who moan about there being too many zombie games are themselves zombies. They are the walking dead, looking to feed on the efforts of others, endlessly they consume - yet they are never satisfied.

Days Gone should serve as a nice stop gap in between waiting for Dying Light 2 and Dead Island 2 to come out. Later potato.
This site works on the honour system of if you use the site, even just once, you pay for the work. Otherwise you can consider it stealing. Get a creator pass or some merchandise.